Malaysia Airlines has issued a text message to the families deeply regretting that MH370 has been lost and none of of the 239 passengers and crew on board survived.

Prime Minister Datuk Seri Najib Tun Razak announced live over TV that the flight ended in the Indian Ocean based on confirmation from British investigators from its Air Accidents Investigation Branch (AAIB).

The text message to the families read:

"Malaysia Airlines deeply regrets that we have to assume beyond any reasonable doubt that MH370 has been lost and that none of those on board survived. As you will hear in the next hour from Malaysia's Prime Minister, we must now accept all evidence suggests the plane went down in the Southern Indian Ocean." 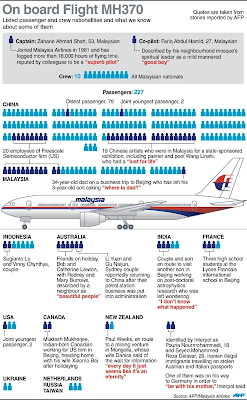 
Where the MH370 ended in the southern Indian Ocean was based on new analysis by UK investigators and the British satellite firm Inmarsat. Inmarsat used new techniques to detect the plane's course.

The search for the plane is ongoing.

Deepest condolences to the families.

Posted by HappySurfer at 8:00 AM