Spitting at the rakyat’s face

Here's an article written by Manjit Bhatia in relation to the recent event of the new government.

He starts with, "Malaysia’s people have been kicked in the groin."

Installing Muhyiddin Yassin’s so-called Perikatan Nasional (PN) through the backdoor as the “new government” is majorly troubling in anybody’s book. Not in Muhyiddin’s, it seems, or his backers’.

To back Muhyiddin’s government is to back an illegitimacy.

PN hasn’t won the popular mandate through open and fair elections. It doesn’t enjoy voter legitimacy. Therefore, it has neither the business nor the right to rule.

To carry on would be a gross travesty of justice perpetrated on the people of Malaysia.

Effectively, PN and its backers have spat in the faces of, to use an ancient Roman political term, the publics.

Yet again the people of Malaysia have been taken for granted.

It hurts when friends backstab you, says Dr M
What would Muhyiddin do?
Ambiga hails Idrus Harun’s appointment, says he has the experience
Perikatan Nasional just an illusion, says PPBM man
Khalid tells of his texts to Muhyiddin and DAP’s readiness to sacrifice
Vote of no-confidence is democratic, not showing distrust of Agong, Patriot tells PAS chief
No confidence motion against PM not an act of disloyalty to king, say lawyers

Latheefa resigns as MACC chief and other updates

If you are still keeping up with the Malaysian saga of the new government taking over, the following are some updates..

After change of government, whistleblower Justo returns to Switzerland

And lastly for now see if you agree with the last bit, the last two sentences of this article..
The Guardian view on a royal coup: a king overturns a historic election

What's happening in Malaysia - with updates

It's hard not to be keeping up on what's happening to the country with the swearing in of the new PM and his team.

If you too are still interested, here's the latest..

This was after the Umno president's lawyer said that his client needs to meet with newly-appointed Prime Minister Tan Sri Muhyiddin Yassin to discuss the formation of a new government.

Ahmad Zahid, 67, is facing 47 charges, with 12 of them involving criminal breach of trust, eight for corruption and 27 for money laundering involving tens of millions of ringgit of funds belonging to Yayasan Akalbudi.

I want to clear my name in court, says Zahid
Prosecution applies to cite Zahid for contempt over ‘meeting’ with Muhyiddin

Who will be the next AG?
Let ongoing court cases continue, says Kadir Jasin

Now we know who the traitors are
The whole world knows it was a coup, says Anwar
Don’t derail PH reform efforts, LFL tells cops on social media probe

No, wait, these are related too..
UDA chairman tests positive for Covid-19
PKR's Wong Chen goes into isolation over Covid-19
UDA director confirmed for Covid-19 was in close contact with ex-minister, officials
EXCLUSIVE - Health Rules Demand PM8 And All Co-Conspirators Must Immediately Self-Isolate For 14 Days?

UPDATES:
Anwar says new coalition won’t be able to manage economy
Ambiga: Vital for new PM to convene Parliament meet and end doubt about support
Muhyiddin clocks in at Perdana Putra
'To my driver, you will be greatly missed,' says ex-Transport minister

Disclaimer:
-- Any political news posted on this blog is from the media. It is not the opinion of the blog-owner. 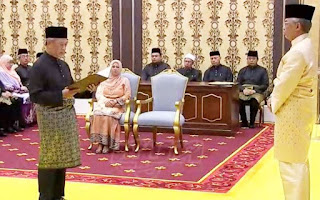 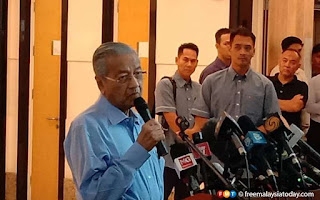