The two objects, the larger of which was measured at 24 metres (79 feet), are found floating in the Indian Ocean according to Australian officials. The larger piece could be the tail section of an aircraft suspected to be the missing MAS flight MH370 according to officials. However, they cautioned that the images may not be from the plane. There can be other debris out there, from ships, for example. The images of the objects were captured by satellite and were being assessed by the Australian Geospatial-Intelligence Organisation. 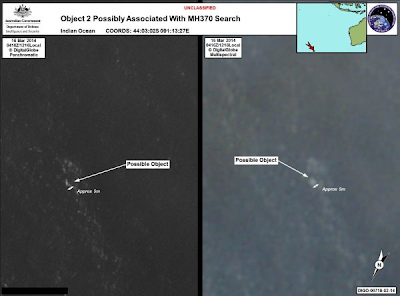 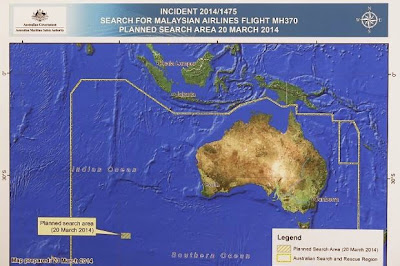 An Australian air force Orion had already been diverted to look into the objects with three more surveillance planes to follow.

Australian, US and New Zealand long-range surveillance planes have been scouring a vast tract of the southern Indian Ocean since Tuesday, with the search focused on an area of 305,000 sq km (122,000 square miles), some 2,600km southeast of Perth.

Experts say it can take up to 48 hours to confirm if debris belongs to plane.  It takes four hours for an aircraft flying out out base in Perth to reach location.

"We must keep in mind the task of locating these objects will be extremely difficult and it may turn out that they are not related to the search for flight MH370," he said.


Malaysia Airlines (MAS) Flight MH370 disappeared, with 227 passengers and 12 crew on board, about an hour after leaving the KL International Airport at 12.41 am on March 8.

It was scheduled to arrive in Beijing at 6.30am on the same day.

According to satellite data, the plane made a turnaround but veered off towards the Indian Ocean. 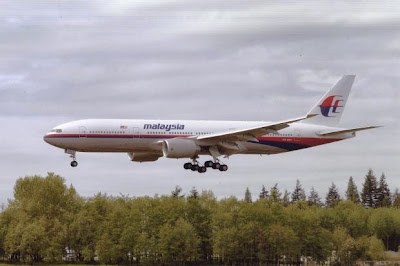 How big is a Boeing 777-200ER actually, the one used on MAS flight MH370? The basic dimensions according to Boeing's website are as follows:

According to published data, each wing measures to about 27.4m long, after adjusting for the width of the fuselage.

The battery in the black box typically runs for 30 days.

Image source: The Star
Posted by HappySurfer at 6:23 PM