Haze is back in Kuala Lumpur

Yum! - smell of barbecue in the air but wait, there's no actual barbecue going on. How's that, you may ask.

Yes, the haze is back again this time of the year - sort of like an annual affair without fail caused by open burning in Sumatra - land clearing for the planting season. At last count 380 hotspots spotted in Sumatra. The smoke is blown over by the south-westerly wind over the Straits of Malacca to the west coast of peninsula Malaysia. Places like KL, Klang, Pangkor, Penang are all affected.

This is the Kuala Lumpur skyline currently - with the 'egg yolk' in the sky. 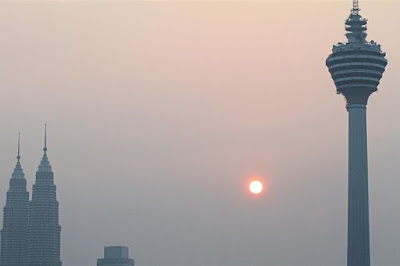 On a clear day this would be a lovely view with both the KL Tower (right) and the PETRONAS Twin Towers in sight. However in hazy times, people living higher up would best be shutting their doors and windows especially for people with breathing problems such as asthma. Yes, do keep your sliding door for lofts shut to stay away from all that unhealthy air. However, the air quality is still good enough to be going out without a face mask. Todate, I've not seen anyone with a mask on yet. So there..

And this was the haze situation in Penang yesterday. 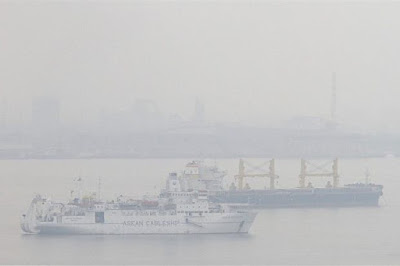 Penang is still shrouded by haze and as 4pm yesterday, the Department of Environment’s monitoring stations in Seberang Jaya 2, Universiti Sains Malaysia and Prai recorded API levels of 79, 72 and 68 respectively.


Image sources courtesy of The Star

Posted by HappySurfer at 5:29 PM