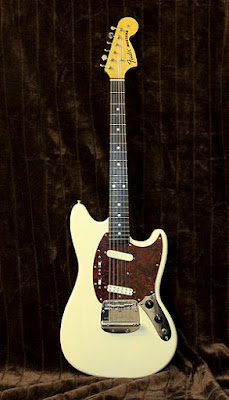 These days, the term "Fender Mustang" no longer just refers to those solid body electric guitars first introduced in 1964 and recently reissued.

Fender Mustang is also the term given to a newer line of guitar amplifiers, loaded with modern features like built-in amp and effects modeling, USB connectivity, and Fender's FUSE software for editing, storing and swapping your effects and presets through your computer.

In the 1990s, the Mustang attained cult status largely as a result of its use by a number of alternative rock bands.
Kurt Cobain of Nirvana fame was one among others who used a Fender. The 2012 Fender Mustang (Kurt Cobain Artist Edition) comes in Fiesta Red, Sonic Blue and Dark Lake Placid Blue with competition stripes.

Both the guitars and the electronic equipment and gadgets are produced by Fender Musical Instruments Corporation.