Yesterday I blogged about Mini Jack Ma, a young Jack Ma look-alike who has won the heart of the founder of Alibaba Group, the real Jack Ma.

Today, I read that Mini Jack Ma has taken the Internet by storm.

Here, you see at left, Fan Xiaoqin (that's his name) chatting with a boy at the Yanhui village ﻿in Jiangxi province where he lives. 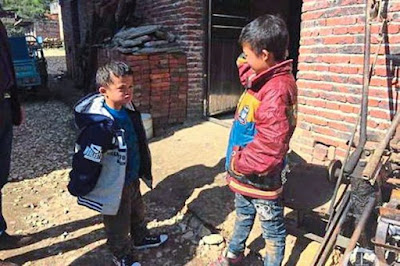 BEIJING: The similarities of facial appearances and expressions with Internet tycoon Jack Ma have changed the life of a poor child in East China’s Jiangxi province after his photos and videos went viral.

A one-minute video of the boy Fan Xiaoqin, or “mini Jack Ma” that Internet users called him, attracted public attention earlier this month, and the video also proved a photo published online last year was real, not photoshopped.

Like the Forbes magazine’s description of Ma, the nine-year-old boy has “protruding cheekbones, dishevelled hair” and “the mischievous dew tooth smiles.”

The short video showed that Fan’s parents were handicapped and his family were poor.

Ma, the founder of the Alibaba Group, said in an internal e-mail on Nov 9 that he would offer financial support for Fan’s study until he graduates from university.

Huang Jiayi, a local at the Yanhui village, said that her older cousin who returned home from his work place in Anhui province first took a photo of Fan in May last year and published it online to attract people’s attention. — China Daily/Asia News Network