Former PM Najib to be charged in Court today

Former Prime Minister of Malaysia Datuk Seri Najib Tun Razak was arrested yesterday and was detained at the MACC in Kuala Lumpur. He is to be charged in court today. 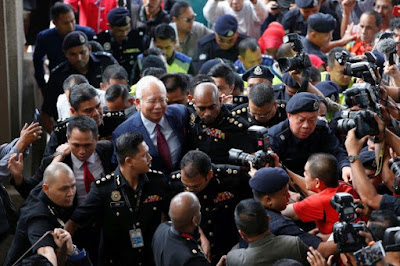 According to The Star, Datuk Seri Najib Tun Razak is expected to face several charges for committing offences under two Acts, sources said.

Chronology of events this morning:

Highly placed sources at the Malaysian Anti-Corruption Com­mission (MACC) said Attorney General Tommy Thomas is expected to lead the prosecution team and Najib will be brought to court about 8.30am.

8.05am: More than a dozen police personnel are stationed outside the Sessions Court where Najib is expected to be charged. They instruct reporters to register a representative per publisher, due to limited seats in the courtroom.

6.55pm: Court gates open to allow a convoy of police vehicles to enter. Police officers from the canine unit are also seen inspecting the car park and courts complex, while officers use metal detectors on nearby plant pots and garbage bins.

Further updates:
Najib's arrest makes headlines around the world
Najib charged with criminal breach of trust
Najib charged with getting RM42mil bribe to approve RM4bil loan from pension fund to SRC (updated)
It's 7 vs 11 in Najib's trial
Najib pleads not guilty (Live Updates)
12.43pm: The court has fixed 19 days for trial between February and March next year (Feb 18 - 28; March 4 - 8, March 11 - 15, 2019) to hear Najib's case.

12.24pm: Court granted Shafee's request for an interim gag order against both digital and print media from discussing merits of the case.

11.53am: Bail for Najib fixed at RM1mil in cash and two sureties. He will also surrender both his normal and diplomatic passports. Najib's lawyer says bail payment of RM500,000 will be made today and the balance of RM500,000 be made before 3pm on Monday.

Posted by HappySurfer at 9:27 AM