30 Things To Know About The CMCO In KL, Selangor, And Putrajaya

Senior Defence Minister Datuk Seri Ismail Sabri Yaakob announced all but three states in the Peninsula would be placed under the CMCO for four weeks from Nov 9 to Dec 6.

Perlis, Pahang and Kelantan are the three unaffected states.

This also means that the CMCO currently in effect in Selangor, Kuala Lumpur and Putrajaya will be extended for another four weeks.

In a live address on 13 October, the Defence Minister said, "As I have announced yesterday, a detailed list of SOPs in regards to the CMCO in Selangor, Kuala Lumpur, and Putrajaya will be issued soon."

Well, the list has been issued. Following are the 30 things in the CMCO SOP and guidelines:-

2. Only two people per household are allowed to leave home to shop for essentials and other items. Those belonging in high-risk groups such as the elderly and children are not encouraged to be outside.

3. Interdistrict and interstate travel is not allowed except for special cases and emergencies for example, in dealing with sickness or a relative's death.

4. Interstate and interdistrict travel is also allowed for work as long as you have a valid working pass and/or a letter from your employer. Those working in their own respective districts do not have to provide a working pass or a letter.

5. Employers must allow workers to work from home.

6. Residents in other states who would like to travel through the highway and pass through CMCO areas must request for permission from PDRM at police stations. Ismail Sabri noted that the government is working on getting an online system set up for this.

7. Individuals wanting to head to airports in the Klang Valley also have to seek permission from PDRM.

8. In regards to economic activities, all sectors are allowed to operate as per usual. For example, restaurants, stalls, food trucks, and hawkers by the roadside are allowed to carry out business.

9. Restaurants and eateries are only allowed to operate between 6am and 10pm.

10. Take away, delivery, and drive-thru is encouraged, but dine-in is allowed. However, there is a limit of two persons per table.

13. All public transport such as buses, trains, and taxis are allowed to operate as usual. However, for e-hailing vehicles and taxis, only two passengers are allowed at a time.

14. Food delivery services can only operate between 6am and 12am.

15. Government and private hospitals and clinics are allowed to operate 24 hours a day.

16. Pharmacies are allowed to operate from 8am to 11pm.

17. Commercial vehicles working for the economic sector are allowed to operate as usual as well as travel interdistrict and interstate.

18. All sectors related to the food supply chain are allowed to operate as usual.

19. Only six people are allowed to perform congregational prayers at mosques.

20. Only six people are allowed to be on duty at non-Muslim places of worship.

21. All recreational and cultural activities are not allowed.

22. Entertainment centres such as theme parks, night clubs, and movie cinemas are not allowed to operate.

23. Non-contact outdoor sports with not more than 10 people at a time are allowed.

24. Usage of swimming pools and other contact sports not allowed.

25. Sports with an audience and players from different states are not allowed.

26. All education institutions such as public and private universities, schools, kindergartens, and nurseries are not allowed to operate.

27. Students who are sitting for international tests are allowed to sit for exams.

28. Educational talks, meetings, conventions, and exhibitions are not allowed.

29. Social gatherings such as weddings and birthday parties are not allowed.

30. All tourism activities in and out of CMCO areas are not allowed. 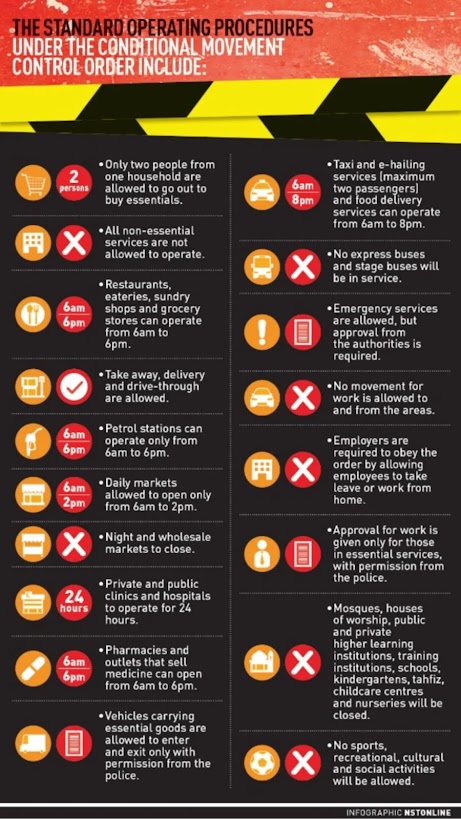 Posted by HappySurfer at 3:18 PM

Email ThisBlogThis!Share to TwitterShare to FacebookShare to Pinterest
Labels: Covid-19