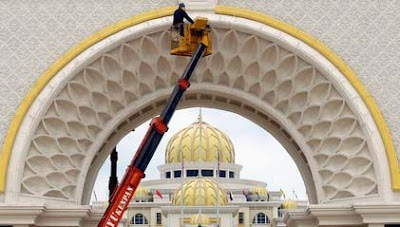 Palace gets ready: A worker on a skylift putting the finishing touches to the main arch at Istana Negara in Kuala Lumpur in preparation for the installation of the 14th Yang di-Pertuan Agong Tuanku Abdul Halim Mu’adzam Shah. - AZHAR MAHFOF / The Star

Tuanku Abdul Halim, who was proclaimed the fifth Yang di-Pertuan Agong in 1970 when he was 42, has been elected to be the 14th King at the age of 84. He is the first ruler to hold the position twice, as well as the oldest elected to the office. His reign began on 13 December 2011 after his election by the Conference of Rulers.

During His Majesty's reign as the fifth Yang di-Pertuan Agong, the prime minister at that time was Tun Abdul Razak and this time, Abdul Razak's son, Datuk Seri Najib, is the head of government.

Filming, in collaboration with Finas, began in December during the taking of the oath and signing of the instrument of office by Tuanku Abdul Halim in Balairong Seri, Istana Negara, Jalan Duta. The documentary will also showcase the new palace, Istana Negara.

In conjunction with the installation of the new King, it has been announced that 11 April 2012 will be a national public holiday for all states and territories of Malaysia.

Source: The Star..NatGeo making documentary on installation of 14th King