MAS flight MH17 makes it the second air disaster for the Malaysian national airline, merely four months and a week after flight MH370 mysteriously went missing en route to Beijing. (The latter plane is still missing though the search is still on.) I must add though that MAS does have a very good safety record.

As for MH17, it was reported that:
GRABOVE, UKRAINE: Dozens of severely mutilated corpses could be seen strewn in the wreckage of a Malaysian airliner that crashed Thursday in rebel-held eastern Ukraine, an AFP reporter at the scene said.

Debris was spread out for many kilometres and the tail of a passenger jet lay in a corn field with the Malaysian Airlines insignia on it while insurgent fighters and several fire trucks were seen nearby the crash site. - AFP 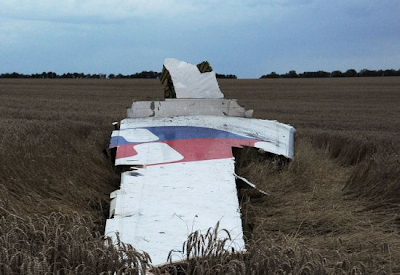 MH17 was en route home to Kuala Lumpur from Schiphol, Amsterdam. Onboard were 280 passengers and 15 crew members. My thoughts and prayers go our to their families and friends. 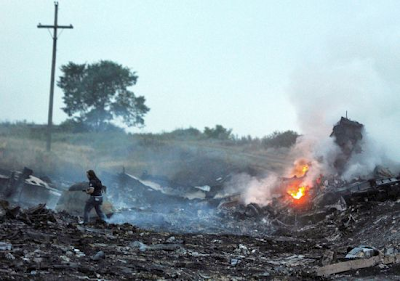 It is believed that the plane had been shot down by a surface-to-air missile (possibly from a BUK missile-launcher). Ukrainian Air Traffic Control (ATC) contacted MAS ATC that it had lost contact with flight MH17 at 1415 (GMT) at 30km from Tamak waypoint, approximately 50km from the Russia-Ukraine border.

The Boeing 777 airliner was cruising at 33,000 feet at the time, supposed to be at a safe height over that region. The requirement is to fly above 31,000 feet. The route used is a common airspace where planes fly. 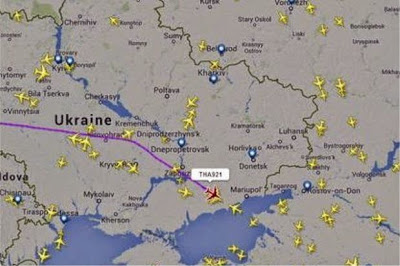 The Star reported an unofficial list of the MH17 flight manifest which states the following:

- 20 Malaysians and two infants were on board
- Netherlands with 143 passengers (highest number of passengers)
- Australia comes in second with 27 passengers
- 11 Indonesian passengers and one infant
- Britain has six passengers
- France and Germany have four each
- Belgium have three
- Canada one
Nationalities of the other 58 passengers were not stated in the list.

Posted by HappySurfer at 7:26 AM