What does this 7th (Ghost) Month hold for us 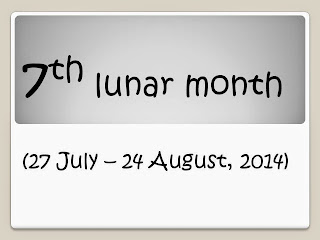 In the Chinese community, the 7th month of the lunar calendar is one to be wary of. It is believed to be associated with the influence of more negative forces resulting in a higher incidence of accidents and deaths hence my warning about being careful in the previous post.

Read about what this sinister 7th lunar month holds for us. The 7th month is also known as the Ghost Month in which offerings are made to stray spirits who are released to freely roam among us. The prayer ritual takes place mid-month at sundown, i.e., 14th and 15th day of the month. These would be on 9 and 10 August respectively. Offerings (of incense and food) are made along the roadside usually outside one's own residence (Psst.. you may want to keep off the streets at these times.)

Some Do's and Don'ts of the Ghost month for your reference..

I'm looking forward to the 8th month though... of lanterns and mooncakes.

In the meantime, I leave you with what's being predicted for this 7th month..

We are in the 7th lunar month of 2014, the infamous Ghost month, which is from the 27th July to the 24th August. This month can be a rough one for the majority. Generally, there will be problems brewing, with some hideous manifestations. Individuals will form groups and some will become outcasts. Compared to other lunar months, this month will certainly see heavy sanctions on more organizations, government bodies or countries. Also, there will be more negative impact on those who work in government bodies, the public sector; even public figures will not be spared.

Authoritative figures will exercise their power by making harsh decisions and executing extreme measures. Many will be intimidated while others will resort to revolt. Power shifts will be inevitable. People and material resources will be sacrificed along the way. For example, there will be major organizational changes where some will be promoted, others demoted, and still others will lose their jobs. Such phenomena will also affect politics.

This lunar month will not favour finances. Some people’s income will be affected which can imply loss of jobs or business deals. For others, it will merely mean that this will not be a good time for investments. Adopt a conservative approach to finances. Keep expenses in check.

There will be a lot of health and safety issues. For the majority, health will be weak. It will be important to improve your immune system. Among different illnesses, the risk of having cancer and tumour will be higher than others. There will be many different forms of freak accidents and man-made troubles like wars. This will not be a good month for traveling overseas. Try your best to reduce traveling frequency or avoid all high - risk activities.

It will be best to stay alert, keep a low profile and minimize the impact this 7th lunar month can bring to you.

For those who need to cleanse their crystals or have been using their crystals actively, you might want to use the moonlight of the 11th August 2014 to do so.

Feel free to circulate this email to friends and relatives or anyone who is interested.