Malaysia will have a surprise tomorrow? 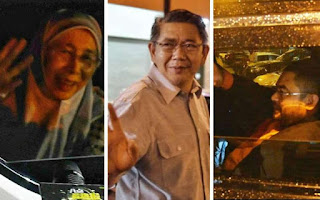 PETALING JAYA: Pakatan Harapan coalition partners have reached a consensus on their position following the political crisis sparked by Dr Mahathir Mohamad’s resignation as prime minister, but will only announce it tomorrow.

Asked if PH was confident of a majority, Khalid said “God willing” though he ruled out a two-thirds majority. He said they had a “sufficient” majority.
Read: PH leaders reach consensus, will reveal it tomorrow


Disclaimer:
-- Any political news posted on this blog is from the media. It is not the opinion of the blog-owner.
Posted by HappySurfer at 11:08 PM