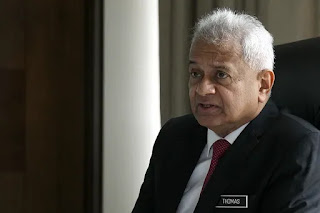 Thomas submitted his resignation letter to Tun Dr Mahathir Mohamad who appointed him to the post for a two-year term which was due to end only in June.

A source said Thomas wanted to resign while Mahathir was still the Prime Minister, albeit interim, as he was the person who appointed him.

It is not clear what will happen with these cases, which are still ongoing, with his departure and that of Mahathir, which is expected soon.

Posted by HappySurfer at 8:29 PM