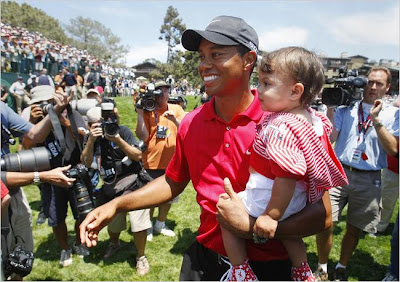 Tiger Woods announced a leave from professional golf to work on saving his family, using the word “infidelity” for the first time in a statement on his Web site.

Asking for understanding from his fans, business partners and fellow competitors on the PGA Tour, Tiger Woods announced on his Web site Friday that he would take an “indefinite break from professional golf” to try to rebuild his personal life.

Woods, the top-ranked golfer in the world, has not been seen in public since crashing his SUV into a neighbor’s tree in an early morning accident on Nov. 27. He has spent the last two weeks in his Orlando, Fla., area home, recovering from injuries and hearing a flood of reports of marital infidelities linking him to multiple women that has swamped the worldwide airwaves.

Woods and his wife, Elin, have been married for five years and have a 2-year-old daughter and 10-month-old son.

Earlier this year, Woods became the world's first athlete to surpass $1 billion in career earnings, according to Forbes magazine.

Bloomberg News reported that Woods’s image was taken down Friday from the homepage of the Web site for Accenture Plc., the consulting company that has used him in its marketing since 2003.

Nike, another Woods sponsor, issued a release that said: “Tiger has been part of Nike for more than a decade. He is the best golfer in the world and one of the greatest athletes of his era. We look forward to his return to golf. He and his family have Nike’s full support.”

There were no immediate reactions from Woods’s other sponsors, including AT&T, Gillette, Tag Heuer watches and Gatorade. 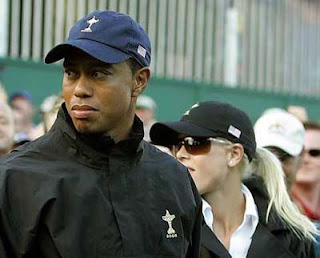 
I am deeply aware of the disappointment and hurt that my infidelity has caused to so many people, most of all my wife and children. I want to say again to everyone that I am profoundly sorry and that I ask forgiveness. It may not be possible to repair the damage I've done, but I want to do my best to try.

I would like to ask everyone, including my fans, the good people at my foundation, business partners, the PGA Tour, and my fellow competitors, for their understanding. What's most important now is that my family has the time, privacy, and safe haven we will need for personal healing.

After much soul searching, I have decided to take an indefinite break from professional golf. I need to focus my attention on being a better husband, father, and person.

Again, I ask for privacy for my family and I am especially grateful for all those who have offered compassion and concern during this difficult period.

The Star - Tiger Woods takes 'indefinite' leave from golf because of 'infidelity'
Posted by HappySurfer at 1:23 PM