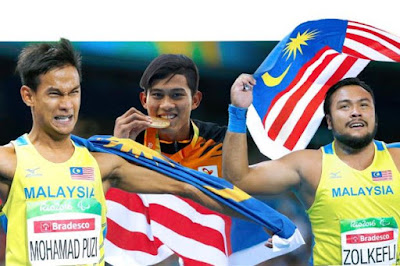 Until their feats on Sunday morning, Malaysia has only won a total of five silvers and two bronzes since the country began competing in the Paralympics in 1972 in Munich. Then, in the space of one hour, Malaysia's national anthem, the NegaraKu, was played twice.

Ridzuan, 29, who has cerebral palsy, sprinted home to win the nation’s first gold medal in the T36 100m final before the 26-year-old Ziyad, who has an intellectual disability, struck gold in the F20 shot putt event – with a new world record to boot.


Not to be outdone, London Olympics bronze medallist Ziyad then took to the field to break the shot putt world record mark twice on his way to clinching the second gold medal for Malaysia.

Ziyad (far right on the top picture) hurled the putt to a distance of 16.40m with his first effort, surpassing the previous world mark of 16.29m set by Australian Todd Hodgetts in 2007. But he wasn’t done yet as he hurled it to a massive 16.84m on his fifth throw.

The Malaysian flag bearer, the youngest in the contingent at 19, faulted his first attempt but cleared 7.47m after that to break the previous world mark of 7.37m set by Jose Exposito of Spain in 2003.

Not satisfied, Abdul Latif broke his own short-lived world mark with a 7.54m leap in his third attempt.

The lanky teenager then broke the world record a third time when he soared to 7.60m in his fifth jump – and that proved enough for him to bag the gold.

Posted by HappySurfer at 1:45 PM