Today, September 15th, the Chinese community around the world celebrates the Mid-Autumn Festival. This festival is also celebrated by the Vietnamese.

Mid-Autumn Festival is also known as Moon Festival, Mooncake Festival or in this part of the world (Malaysia and Singapore) also referred to as the Lantern Festival (though not to be confused with the other Lantern Festival celebrated on the 15th day of Chinese New Year).

Mid-Autumn Festival is celebrated on the 15th day of the 8th Month of the Lunar year.

The Mooncake Festival is one of a number of traditional Chinese festivals. Malaysians of Chinese descent make up about 25% of the population of Malaysia so Chinese festivals are observed here in keeping up with traditions.

Traditionally, the Mid-Autumn Festival is in celebration of the end of the harvest season. Ancient Chinese emperors worshiped the harvest moon on this day of the year (the Chinese lunar calendar), as they believed the practice would bring them a bountiful harvest the following year.

The practice of moon worship is still practised today, in this day and age. Only the Chinese Buddhist/Taoist community here in Malaysia follow the custom. A table would be set up outdoors with offerings of fruits and snacks and mooncakes, of course, together with lighting of incense/joss-sticks and candles.

Offerings are actually made to a lunar deity, Chang'e, known as the Moon Goddess of Immortality. The myths associated with Chang'e explain the origin of moon worship during this day. One version of the story can be found on Wikipedia, as described in Lihui Yang's Handbook of Chinese Mythology.

After dinner, family members would continue the festivity with more eating, mooncakes being a must-have food item, naturally. Other foodstuff associated with this festival include the pomelo, small yams or taro and water caltrops or ling kok (in Cantonese).

Children will play with lanterns. The lantern, like the mooncake, is synonymous with the Mid-Autumn Festival which explains why this festival is also called Lantern Festival.

Lanterns are traditionally handmade with paper and bamboo strips and lit by a candle. However, lanterns have evolved over the years and contemporary versions are sometimes made of plastic, lit by a battery-operated bulb and feature cartoon characters though traditional animal shapes or the star-fruit are still available.

The tradition of eating mooncakes during the festival began in the Yuan Dynasty (1271–1368), a dynasty ruled by the Mongols.

At the end of the Yuan Dynasty, the Han people's resistance wanted to overthrow the rule of the Mongols, so they planned an uprising together. But they had no way to inform other Han people who wanted to join them of the time of the uprising without being discovered by the Mongols.

The military counselor of the Han people's resistance army, Liu Bowen, thought out a stratagem related to mooncakes. Liu Bowen asked his soldiers to write "uprising on the night of the Mid-Autumn Festival" on slips of paper, put them in mooncakes, and then sell them to the other Han people.

When the night of the Mid-Autumn Festival came, a huge uprising broke out and the Han people succeeded.
Source: China Highlights 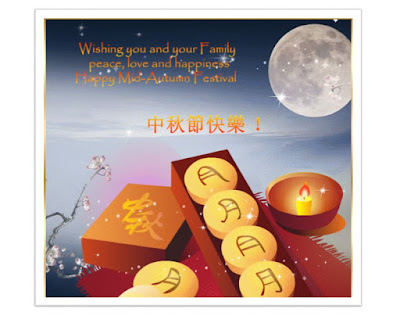