What can Malaysians expect from the new budget..

Let's see what The Star has to say:

Below are some items that could feature in the coming year's budget, according to analysts' research notes and local media reports.

CASH AID
RHB Bank foresees a RM100 ringgit hike in cash handouts for low-income households, bumping up the allocation to about RM6.6 billion next year in a bid to stimulate consumer spending. For 2016, it was increased by RM50 to RM1,000 per household.

GST
The Government will likely maintain the goods and services tax introduced in April 2015, at 6% to avoid any disruption to household expenses and cost of doing business, says asset management firm Affin Hwang.

PERSONAL INCOME TAX
There will likely be no cut to personal income tax rates, though there may be more provisions for tax relief next year, according to Maybank Investment Bank. More..

We'll know for sure this evening or out in black-and-white tomorrow. Que sera sera. This 'Starbucks' uncle says it well.. 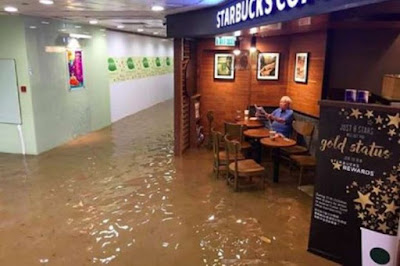 This image has gone viral. It shows an elderly man in Hong Kong, reading his newspaper nonchalantly in a flooded Hong Kong Starbucks cafe. The Chinese has a saying that even if the sky falls, you can use it as a blanket. No big deal at all.