Movie and music awards events are always thronged by fans. It was raining at the Golden Globes award ceremony last night but that did not deter fans from gathering outside along the red carpet wrapped in plastic ponchos and cheered as slightly soggy celebrities passed by. Picture below courtesy of New York Times. 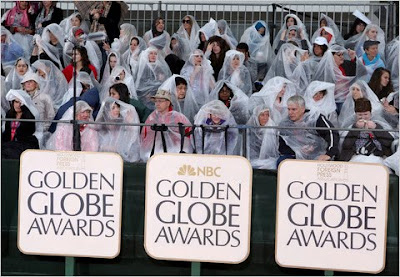 I wonder if anyone brought along an electric blanket considering the current increased snowfall this winter. Alright, maybe not, Los Angeles weather is not as bad.

The Beverly Hilton Hotel is where the 67th Annual Golden Globes ceremony was taking place. The ceremony was seen in more than 160 countries worldwide, though I missed it. Was it shown on Astro? Anyone?
Posted by HappySurfer at 12:18 PM