A Cool Book-vending Machine by MPH

The vending machine has got to be one of the best inventions of our time, wouldn't you agree? Necessity being the mother of all inventions, these smart machines that dispense products including the very basic drinking water to sodas, coffee, tea, soups, toys, to foodstuff and snacks such as cookies, cakes, buns, gumballs, nuts to cigarettes, DVDs, even condoms have become an integral part of our life in a way.

According to Wikipedia, Japan has the highest number of vending machines per capita, with about one machine for every twenty-three people. Japan's high population density, relatively high cost of labor, limited space, preference for shopping on foot or by bicycle, and low rates of vandalism and petty crime, provide a fertile environment for vending machines. While the majority of machines in Japan are stocked with drinks, snacks, and cigarettes, one occasionally finds vending machines selling items such as bottles of liquor, cans of beer, fried food, underwear, iPods, porn magazines, sexual lubricants, live lobsters, fresh meat, eggs and potted plants.

But of course, here in Malaysia, we have less "exciting" items from vending machines. To be unveiled next month at the KL Bookfair, will be MPH's book-vending machine. Malaysians will be the first in this part of the world to be able to buy books through a vending machine, thanks to MPH Bookstores Sdn Bhd. 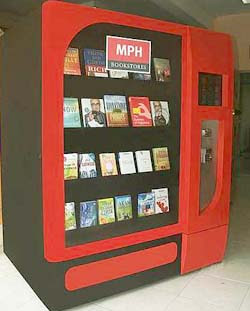 "The stock will be changed often so every time someone walks past it, they will see new books,” says Donald Kee, COO of the bookstore chain.

The books in the machines will be at least 20% lower in price than those sold in brick and mortar stores, with the possibility of bigger discounts later on.

The machines will have a touch screen so customers can read synopses. And in the future, says Kee, MPH will try to add book reviews and other features. Payment modes include credit cards, debit cards and the Touch‘n’Go toll and fare cards.

I look forward to these. I know some people would swear by the Kindle but don't you think there is something nice about having a physical book in hand?


Source: The Star..Easier access to books via the vending machine
Posted by HappySurfer at 10:12 AM