Does Supermoon cause Volcanic eruptions, Tsunamis and Earthquakes? 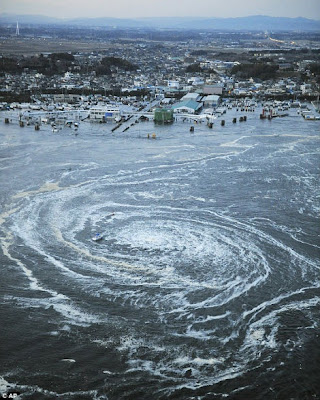 The above image, tsunami waves created a whirlpool off the coast of Oarai in Japan's Ibaraki Prefecture on March 11 following the magnitude 8.9 earthquake.

Some theorists claim that Japan's devastating earthquake was caused by the Moon.

On March 19, fifteenth day of the lunar month, the Moon will be at its closest distance from the Earth in 18 years. The event - known as a lunar perigee or "supermoon" - happens when a full or new Moon comes within 90 per cent of its closest approach possible.

Professor George Helffrich, a seismologist at the University of Bristol in the UK, said: "Complete nonsense. The moon has no significant effect on earthquake triggering."

Geologists said that the deadly Ring of Fire bordering the Pacific Ocean was the cause of Friday's earthquake.

Dr Roger Musson, of the British Geological Survey, said: "The cause of this earthquake is that the Pacific Plate, which is one of the largest of the tectonic plates that makes up the crust of the Earth, is plunging deep underneath Japan.

"It's being pushed down and it can't slide down smoothly so it sticks. It sticks for tens of years and then eventually it breaks and moves very suddenly down and as it does so it buckles and gives the seabed a sudden kick over areas of hundreds of square kilometres and that displaces an enormous volume of water."

But what turned Friday's tremors into a devastating tsunami was the sheer force with which the earth shook.

Measuring 8.9 on the Richter scale, Japan's quake is the seventh strongest ever recorded - up to 1,000 times more powerful at its epicentre than New Zealand's.

Ryan said it took a specific type of quake to generate tsunami waves. "This has been caused by movement in the sea floor," he said.

Despite the huge scale of Friday's quake, Ryan said it was about half as forceful as the 9.1 monster that tore across the Indian Ocean on Boxing Day 2004, claiming an estimated 220,000 lives.

"The amount of energy generated is about double,"Ryan said.


And I'll be attending a wedding dinner at a hotel on Mar 19. It must be an auspicious day for weddings.