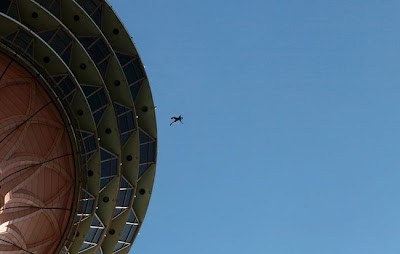 What do you see in the image above? You are right if you say the above is a picture of someone falling from the sky or jumping off a tall building.

To be exact, the caption on the image borrowed from Toronto Sun says: A BASE jumper leaps before parachuting down from Kuala Lumpur Tower September 29, 2011.

This jumper is a participant in the Kuala Lumpur International Jump Malaysia 2011 event which started on Wednesday, ending today, Sunday. This year's jump coincides with the 15th Anniversary of Menara KL and to join in the celebration are jumpers from Malaysia, Australia, Ireland, New Zealand, Britain, Japan and the United States.

(BASE stands for "building, antenna, span, earth", which are the fixed objects from which jumpers with parachutes leap off.)

This year's event attracted 90 jumpers, five of which are women BASE jumpers.

Jumps were/are from 10am to 6pm. Night jumps which were introduced last year were held on Friday and Saturday from 8.30pm to 10.30pm. 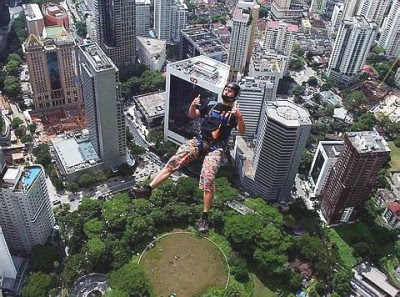 Image from The Star

Visitors were able to watch the event at the tower’s open deck with exclusive premier tickets priced at RM100 and RM150 for the day event.

For the night event the tickets were priced at RM150 and RM200.

If you are in the vicinity of the KL Tower, you could probably see them in the sky. 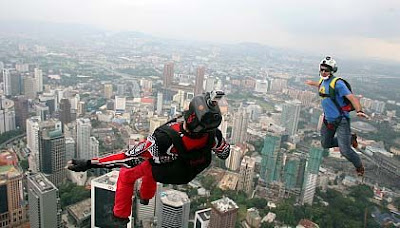 Image from The Star

Posted by HappySurfer at 2:06 PM