X is for X-factor 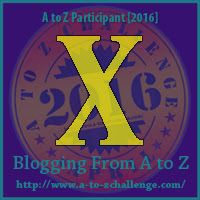 X is for X-factor.

The X-factor referred here is the television music competition franchise created by Simon Cowell. It originated in the United Kingdom and it is now held in various countries.

The "X Factor" of the title refers to the undefinable "something" that makes for star quality. The prize is usually a recording contract, in addition to the publicity that appearance in the later stages of the show itself generates, not only for the winner but also for other highly ranked contestants.

Sam Bailey certainly has that X-factor. Follow her progress, in the video below, from audition to the final and eventually wins the X-factor in 2013.

Posted by HappySurfer at 7:18 PM

Email ThisBlogThis!Share to TwitterShare to FacebookShare to Pinterest
Labels: A to Z Challenge, Music videos