Below is a shot of a giant turtle in the waters off Sipadan Island. This photo, and the others, were taken by a friend's friend who went on a week-long diving-holiday a few years ago. He said he had such a wonderful experience that he would not hesitate to go back there again. 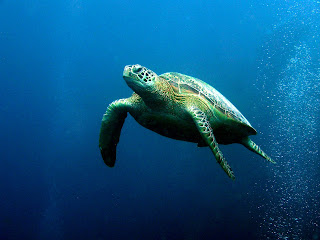 Sipadan Island has long been noted as a world-class diving site. It is located in Sabah in East Malaysia on Borneo Island. Those who have been there would be able to see for themselves the true beauty of Sipadan Island (or Sipadan as it is commonly-referred to) and its surroundings of white sandy beaches, crystal clear waters, abundant variety of marine life, more than anyone can imagine.

Sipadan Island, Malaysia's only oceanic island, has been nominated in the running to be listed as one of the New 7 Wonders of the World along with Thailand’s Ko Phi Phi, Bora Bora, the Galapagos, Cocos Island and Terra del Fuego.

“We only knew about three weeks ago that some people who had dived at Sipadan had nominated the island for the listing and we moved quickly to qualify by setting up the official supporting committee.” 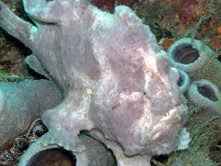 We are beginning to see the need to preserve our heritage sites all over the country, so preserving Sipadan with all its natural splendour is a natural progression.

How do we ensure Sipadan's preservation? Since it is in the running to be listed, online voting is ongoing just as we speak. Let us do our part by putting in our vote to have Sipadan Island listed as one of the new 7 wonders of the world. This is the only way to ensure the preservation of this natural wonder as well as to ensure continuous effort is placed on its upkeep. To cast your vote, go to the new7wonders website. 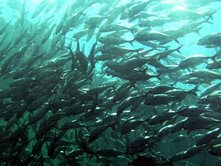 From Wikipedia:
Sipadan is located at the heart of the Indo-Pacific basin, the centre of one of the richest marine habitats in the world. More than 3,000 species of fish and hundreds of coral species have been classified in this ecosystem.

A mysterious turtle tomb lies underneath the column of the island, formed by an underwater limestone cave with a labyrinth of tunnels and chambers that contain many skeletal remains of turtles that have become lost and drown before finding the surface. 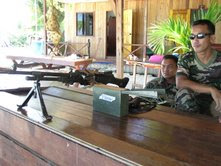 After the episode of the 2000 terrorist attack by the Filipino terrorist group, Abu Sayyaf, Sipadan is now heavily guarded by the Malaysian military to ensure safety of tourists. Visitors to the island are required to seek approval through the resorts operating on the island.

Try to avoid going from December to February as it is the rainy season though you will not have to contend with the crowd.

For diving, go between April to November and best months are July and August.

How does one get to Sipadan Island?

You will have to fly into Sabah and the point of entry is either Kota Kinabalu or Tawau. If you arrive at Kota Kinabalu, you will need to catch a connecting flight to Tawau.

Advance booking on accommodation is necessary. Do some research and see which resort you would like to stay in. The resort operator will meet you at the airport and send you in a van to Semporna. The journey from Tawau airport to Semporna is around an hour. The scenery along the way is nothing to shout about but an hour of plain oil-palm plantations passes by fast as the roads are good.

It is advisable to fly into Tawau on an earlier flight to catch the resorts scheduled boat transfers. Travelling on unscheduled transfers may cost more.

Suggested airlines include Air Asia and Malaysia Airlines. If you are flying into Singapore, it would be cheaper to take Air Asia from Senai airport in Johor Bharu. Air Asia flies direct to Kota Kinabalu from Senai.

Buses are also available from Tawau to Semporna or from Kota Kinabalu or Sandakan to Semporna. Semporna is where you take the boat-ride to Sipadan. It takes an hour or so by speedboat.

You can also take a taxi from Tawau airport to Semporna at the rate of between RM80 to RM100.

Welcome to Malaysia and enjoy your visit to Sipandan!


More information can be found on WikiTravel - http://wikitravel.org/en/Sipadan
Posted by HappySurfer at 11:16 AM