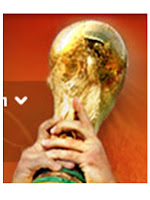 With France out of the World Cup without winning a game, Italy, the defending champion, has also joined the bandwagon (not in a good way unfortunately). Italy too did not win any game. Japan has qualified for the next round after beating Denmark last night, earning 6 points after winning two games losing one.

We still have two more groups to go, Groups G and H who will be playing tonight. Group G's game will be interesting to watch, Brazil vs Portugal. Under normal circumstances, win or lose these two countries would already qualify with their scores of 6 points (Brazil) and 4 points (Portugal), the latter on goal-difference. Côte d'Ivoire would have to perform extraordinarily well beating North Korea with at least a 7-goal difference(!) in order to beat Portugal. What do you think? Can they do it? That's left to be seen tonight. Group G is the group to watch!

Come to think of it, Group H games would also be nail-biting with all three top teams vying for a spot to the next round. Who are you rooting for?

Thought I'd put together the scores borrowed from the FIFA website. Click on image below to enlarge. No matter where you're watching the games, either at home, at a friend's or at the mamak stall, enjoy the games tonight.. 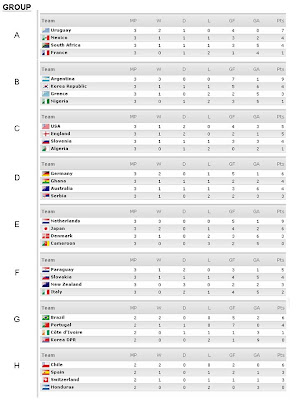