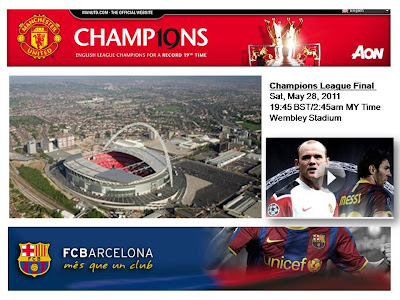 This is going to be huge! Tonight's game, I mean, between Barcelona and Manchester United. It's their Champions League final, two in three years which Man U lost to Barca in 2009 with a scoreline of 0-2.

Ferguson said. "It really could be the best final of the decade. The attraction of two teams with such history is obvious. Anything could happen in this game." - according to The Daily Chilli.

Here's image of Man United players training on the eve of the crucial day.

"According to the bookmakers, we are underdogs, but I don't think that matters to us," Ferguson said. "Anyone coming to a game of this nature doesn't care what the experts say or the bookmakers say.

Who are you rooting for? Here are some stats comparing both teams achievements thus far. (Click on image to enlarge.) 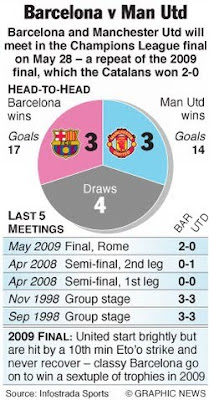 Remember Paul the Octopus, well, in Spain, Iker the “psychic” octopus has predicted Manchester United will beat Barcelona to be crowned club champions of Europe in today’s final in London.

Iker forecast a United win in the Champions League by choosing to eat a sardine from a glass cylinder decorated with the club’s crest instead of one from a cylinder with Barcelona’s crest at the Sea Life Aquarium in the southern resort of Benalmadena. 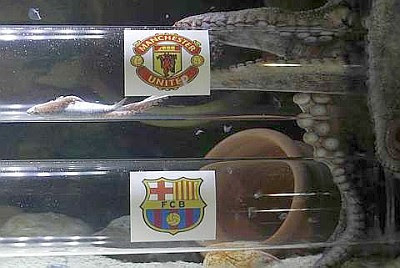 Barca need not worry though, as Iker last month wrongly forecast the Spanish club’s arch-rivals Real Madrid would make the Wembley final. So there.. More..

Besides prestige and all, what else would the players look forward to? Barcelona star, Lionel Messi and his teammates will each earn 650,000 pounds (about twice the amount MU players will be making) if they win the Champions League final which works out to more than 7,000 pounds per minute or 120 pounds for every second on the pitch.

The amount is not evenly spread out among the squad however. It is believed World Footballer of the Year, Messi and stars like Xavi and Iniesta will pocket well over a million each.

As for Manchester United players, each player can expect to pick up around 350,000 pounds if they beat Barcelona. This is part of a 9 million-pound reward for winning the title and conquering Europe.

Here's the team line-up courtesy of Yahoo! (Click on image to enlarge.) 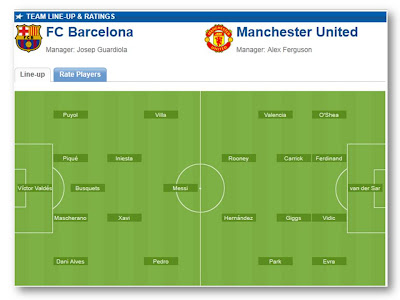 Enjoy the game. Check out kickoff below, also indicated on image at the top.