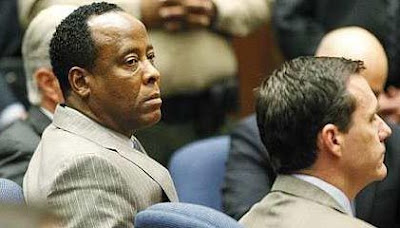 Finally it's all over and Michael Jackson can rest in peace?

After a six-week trial and nine hours of deliberation, the jury reached the unanimous verdict that Dr Conrad Murray is guilty of involuntary manslaughter.

Conray Murray was Michael Jackson's personal physician and was the one who gave the "Thriller" singer a fatal dose of the powerful anesthetic propofol, which was ruled as the main cause of the pop star's June 25, 2009 death. Dr. Conrad Murray had pleaded not guilty.
More..Michael Jackson's doctor found guilty of manslaughter, The Star
Posted by HappySurfer at 10:07 AM