According to Bangkok Post, images of a Thai Airways International Airbus stranded in deep floodwater at Don Mueang airport have caused misconceptions among many people outside Thailand that Bangkok is closed to air traffic. 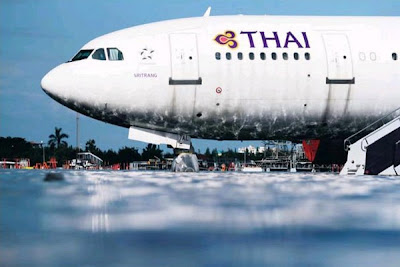 Images like this could be driving away visitors to other destinations according to an airport official. The reality is, the main airport, Suvarnabhumi, is functioning.

Strong 3.5-metre-high polder dykes surrounding the airport constructed in 1995 and completed in 2000 are capable of preventing penetration of water. The dykes have made the airport a closed area, whereby water cannot flow in from the outside.

Also, travel to and from the airport is unaffected as the roads and the Airport Rail Link tracks are elevated above the dykes.

In any case, some locals are of the opinion that now is not the time for people to be going to Bangkok as there are far too many problems still related to the floods, including the high possibility of disease breaking out. Clean-up will take months after the flood has receded.

How about an all-around view of a flooded part of the city? Here is an interesting 360-degree panoramic view of Kaset Intersection Bangkok Flood 2011 in Bangkok


Meanwhile, another zoo in the Bangkok area has been hit as floodwaters continue to swamp the city.

The 500-acre complex, Safari World, is the second Bangkok animal park to come under threat in recent weeks, after the city’s popular Dusit Zoo was forced to relocate some of its animals when floodwaters got too close. Safari World is located in a particularly vulnerable place, east of Bangkok’s shuttered Don Muang airport in an area of the city that has faced serious, ongoing flooding.

Parts of the complex have been hit by knee-high water, but staff have pushed the animals farther inside the zoo onto higher ground. Nevertheless, “we’re not evacuating,” Mr. Litti, the executive vice-president said. In many ways that would present more challenges than staying, he said, due to the logistical issues.

More on Wall Street Journal.. Another Bangkok Zoo Gets Hit By Flooding