As flood worsens in Kelantan caused by heavy downpour in this year-end monsoon season, more residents are being evacuated. A total of 2,345 people were still at flood relief centres in Kelantan and Terengganu on Saturday, The Star reported.

Although this number is small compared to the number in Bangkok, it nevertheless disrupts routines and causes inconvenience and hardship to the victims. The number of evacuees in Kelantan has risen to 1,884 but in Terengganu, the number has dropped to 461.

In Pasir Mas, a stretch at Km24 of the Pasir Mas-Rantau Panjang Highway is impassable to light vehicles. 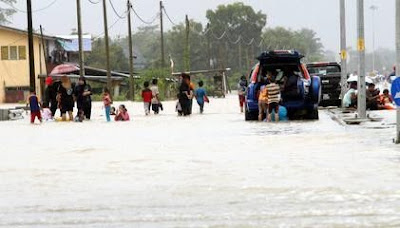 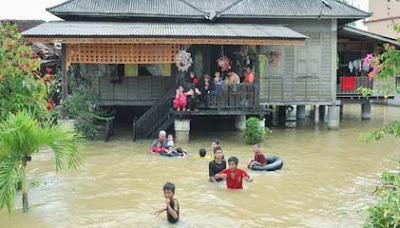 For readers not familiar with the Malaysian landscape, note the kampong (rural/village) house in the second image. This is a typical house in rural parts across the country. The elevated nature of these houses is a big help in the event of floods. In a village setting, free-range chickens and other fowl are a common sight under the house or running around in the compound. Being made of wood, these houses, usually big, are airy and cooling.

Source: The Star
Posted by HappySurfer at 3:23 PM