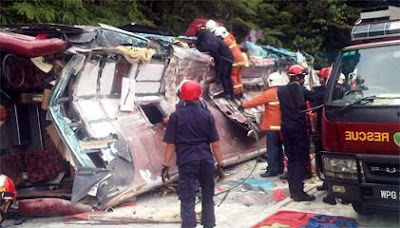 This happened at 8:25am this morning. The Star reported that a bus carrying 24 Indian nationals skidded and overturned as it was coming down from Genting Highlands, killing two and injuring at least a dozen passengers. The accident occured at KM4.5 of the Kuala Lumpur-Karak Highway.

Efforts were underway to extricate two passengers still trapped in the bus, according to a Fire and Rescue Department spokesman.

Three fire engines and 25 rescue personnel were at the accident site. The injured were sent to the Kuala Lumpur and Selayang Hospitals. A woman in her 50s and a man died on the way to the hospital.

26 people were onboard the bus, including two drivers.

The Star updated that the two drivers are among the injured. They have been detained by police to facilitate investigations.

The bus was headed for Kuala Lumpur, and then Singapore.

All the passengers were from Punjab.