If you were in the city the past week and have noticed that the malls and shopping complexes were rather crowded with foreign visitors, there was a good reason why. Formula One was in Kuala Lumpur over the weekend. All 5-star hotels would have been booked months ahead and Formula One roomrates apply. 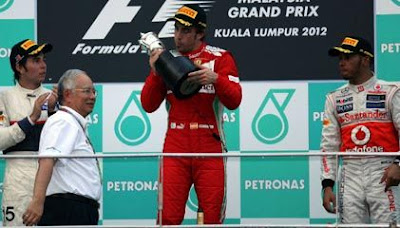 SEPANG, (Reuters): Ferrari's Fernando Alonso won the Formula One Malaysian Grand Prix on Sunday ahead of Sauber's Sergio Perez in a race that was stopped for 51 minutes as officials red flagged the race after just eight laps due to torrential rain at the Sepang circuit.

Pole sitter Lewis Hamilton finished third for the second race in a row in his McLaren with Red Bull's Mark Webber behind him in fourth.
More..The Star..Ferrari's Alonso wins Malaysian Grand Prix

Email ThisBlogThis!Share to TwitterShare to FacebookShare to Pinterest
Labels: Formula One