Haze situation and a little Surprise..

This morning I stopped to take this picture of this very fertile papaya tree silhouetted against the morning sun. Actually, I wanted to show that the air quality has improved a tad, at least here in Kuala Lumpur, as opposed to yesterday's API readings. No acrid smell in the air. 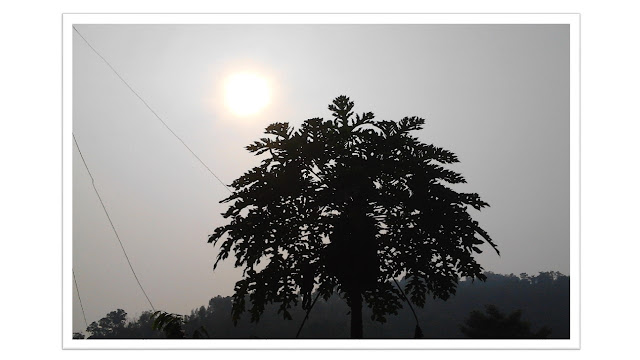 As you can see, the sun is not just a well-defined egg yolk in the sky. However, today, schools in Penang, Putra­jaya, Selangor, Kuala Lumpur, Perak, Kedah, Perlis, Negri Sembilan and some areas in Pahang and Sarawak remain closed.

Let's take a look at the API numbers for today. As you can see the north-western region of the peninsula is getting hit really hard - in purple. But let me draw your attention just a bit to one area in southern Kalimantan on the island of Borneo. I've circled it in red with an arrow pointing to it. That's a 999 reading! See that? Pity the people there.

And here's an interesting picture I stumbled upon on The Jakarta Post. This shows the vicinity of the Lake Gardens in Kuala Lumpur taken three days ago. Read caption below the image. 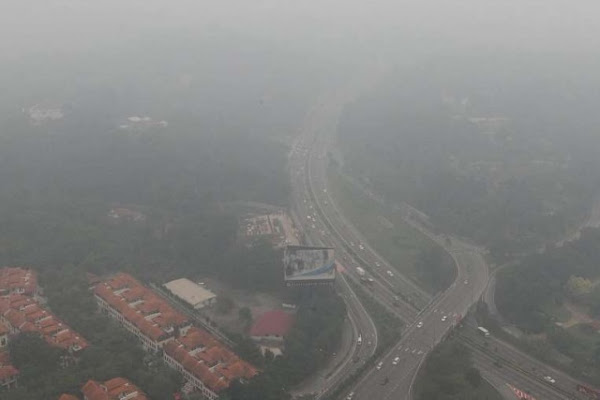 Thick haze obscuring Lake Gardens in Kuala Lumpur, Malaysia, yesterday. The haze from the fires in Indonesia has spread across the country itself, as well as Singapore, Malaysia, Thailand and the Philippines. (The Star/ANN)

Alright, here's why we are getting the haze.. a hotspot map. Notice the lines of hot spots in Sulawesi and Papua. In Papua, "people are opening new agriculture areas, like palm oil", according to The Jakarta Post.

The fires raging in forests and peatland across Indonesia, which produce the thick haze that has spread across South-east Asia in recent weeks, are unlikely to be put out in the next month or two.

This means the crisis could persist into the new year, experts said, as the latest reports show hot spots emerging in 18 provinces in the archipelagic state in the past few days.

On a brighter note, not all parts of the country are shrouded in haze. There is still bright sunshine and beautiful weather in Sabah particularly at resorts at Semporna. Ask these people..