From where I am, Kuala Lumpur, the haze is still bad. I know because I still need shades when I go out even though the sun is just a dull orange ball in the sky.

But surprisingly the API reading on DOE's website shows otherwise. In fact, it looks very good on the chart. Take a look..

Except for Port Dickson with a reading of 103, it's either green or blue everywhere else. 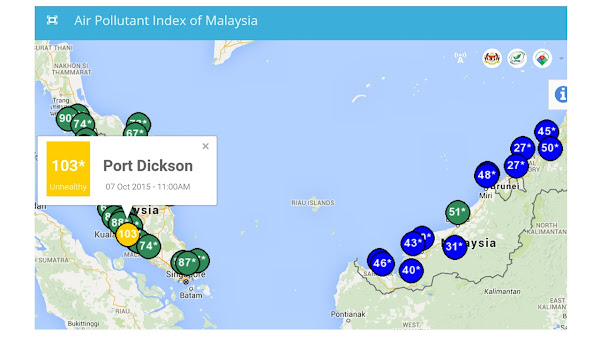 Yesterday, the haze was so bad in Langkawi that flights were not allowed to take off with visibility at just 500km.

I also read the other day the haze is also affecting migratory birds making their annual journey here to escape the winter of east Asia - China, South Korea and Japan. Malaysia is one of the places these birds escape to. As migratory birds use the stars to guide them in their long distance flight south, the haze could make their flight difficult.

Today, there is a news report that the people of Songkhla had sent a letter of complaint to Indonesia. People over there are affected by the choking haze caused by forest fires in Indonesia. The letter, among others, stated that the haze had started to take its toll on public health.