Update: The aircraft carrier will be here for 4 days in which Sailors will have the opportunity to volunteer their time at several local community service projects, including work in two children’s homes and a senior citizen’s home. - Source 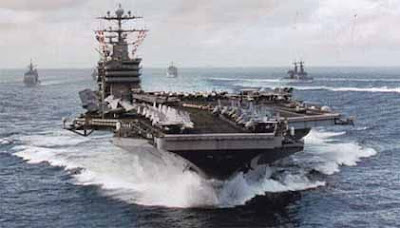 Sometimes I wish Kuala Lumpur is situated by the coast where you can see boats, yachts or even ocean-liners gliding by, or at least located alongside a huge body of water such as a lake or a river where you can enjoy watching people sailing or watch fishing boats go by. Lovely!

Not sure whether the vessel is still at Port Klang but the American aircraft carrier, USS John C. Stennis, made a scheduled port call yesterday. The name doesn't ring a bell?

This same aircraft carrier was used in movies including Transformers: Revenge of the Fallen, Executive Decision and others. It also responded to disasters such as Hurricane Katrina and the tsunami in Indonesia.

Image source: The Star
Posted by HappySurfer at 11:00 AM