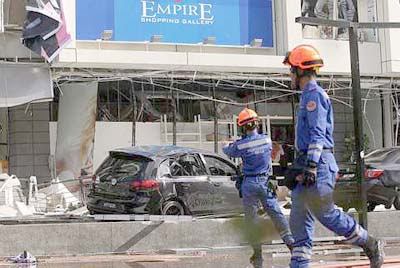 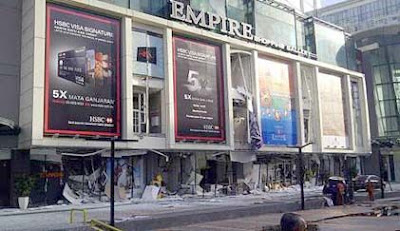 Four people were injured while more than 300 were rescued and evacuated after a suspected gas leak caused an explosion on the lower ground floor of the Empire Shopping Gallery here early Wednesday.

The 3.45am explosion damaged two other floors in the complex. It also caused damage to the adjoining office block and studio apartments.

The damage to the lower and ground floor of the mall was caused by the impact of the explosion rather than fire.

Police have ruled out sabotage or terrorism as the cause of the gas explosion. Meanwhile, Selangor Mentri Besar, Tan Sri Khalid Ibrahim, who visited the scene, said the mall would be temporarily closed to the public, pending safety assurance by the authorities and building is deemed safe although no serious structural damage was detected at the location of the explosion. The temporary closure will affect 180 tenants.

Empire Shopping Gallery has been closed for the authorities to determine the cause of a gas explosion which rocked the building, injuring four people.

The closure, which covers the entire complex that houses a hotel, commercial and residential units, is effective until the structures are declared safe by the authorities.

The management company that manages the mall confirmed that the building's main structure is still intact, noting that the damage is confined to glass panels, ceiling boards and several brick walls “mainly due to the rapid expansion of air during the explosion”.

About 300 people were rescued and evacuated, including some 170 hotel guests who were relocated to nearby hotels for safety reasons. Employees who turned up for work this morning were asked to go home as the mall is closed until further notice.

The effects of the explosion reached both ends of the mall, and all five levels recorded some form of damage.

Several windows as high up as the eighth floor of the 12-storey office tower were also shattered.

Source: The Star
Posted by HappySurfer at 3:36 PM