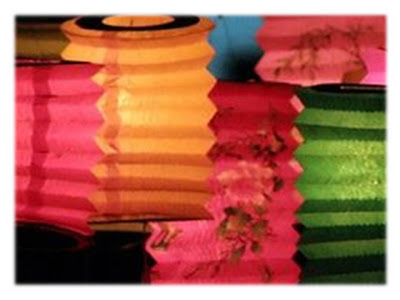 Today, Sep 12, is Mid-Autumn Festival or often referred to as Lantern Festival or Mooncake Festival here in Malaysia. Mid-Autumn festival is celebrated on the fifteenth day of the eighth lunar month which incidentally is believed to be an auspicious month for marriages, so you might see many Chinese weddings and engagements this month.

On the home-front, families get together for dinner just as they would during Chinese New year, Dumpling festival and Winter solstice. The Mid-Autumn Festival is therefore considered as one of the four most important Chinese festivals.

The Mooncake/Lantern Festival involves family members gathering together after dinner for some more family time in the spirit of figuratively gazing at the moon. The moon tonight is believed to be the fullest and brightest among all the year's fullmoons. Traditional food during this Mooncake festival includes the mooncake (of course), the pomelo fruit and the mini yam or taro. Children will play with colorful paper lanterns in various animal forms and colors. Lanterns would also be hung around the courtyard for that air of festivity. 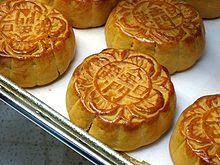 A little bit on the mooncake delicacy. Typical mooncakes are round or rectangular pastries, measuring about 10cm in diameter and 4–5cm thick. A thick filling usually made from lotus seed paste is surrounded by a relatively thin (2–3mm) crust and may contain yolks from salted duck eggs. Mooncakes are usually eaten in small wedges accompanied by Chinese tea. (Wikipedia)

For families of Buddhist/Taoist faith, offerings of incense and food (mooncakes, pomelos, etc.,) will be made to deities including the lunar deity. My late grandmother found it impossible that man had landed on the moon so she continued her normal ritual of making offerings to the moon. Traditions die hard. I wonder if this tradition will stand the test of time, but no matter, it is fun while it lasts.

So, to you who celebrate this fun festival, let me wish you a Happy Lantern/Mooncake/Mid-Autumn Festival and a good harvest the following year!
Posted by HappySurfer at 3:12 PM