Feng Shui or not.. Year of the Dragon

If Feng Shui predictions are to be believed, are we seeing the predictions beginning to materialise so soon in the new year of the Dragon? 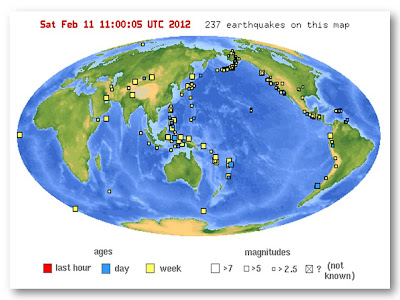 Latest Earthquakes in the World - Past 7 days
Source - earthquake.usgu.gov

According to the Flying Star Chart, the countries potentially affected by the negativity would be the Asean region and Australia. The affliction would most probably be centered on floods including landslides, tsunamis, and so forth.

Series of incidents so far:

This morning, Saturday, Strong tremors were felt in Tokyo as 4.7 quake jolts Ibaraki The Star reported that it jolted Japan's Ibaraki Prefecture in Kanto region at around 10:27am local time (0127 GMT) according to the Japan Meteorological Agency (JMA).

Strong tremors were also felt in Tokyo. There is no immediate reports of damage.

Yesterday (Friday), the Lokon volcano in North Sulawesi erupted according to the Indonesian Centre for Volcanology and Geological Hazard Mitigation.

A rumbling sound followed by the spewing of thick ash some 2,000m into the sky heralded the eruption at 8.20am, it said.

People living in the vicinity of Mt Lokon have been advised to keep at least 2.5km away from the Tompaluan crater.

Mt Lokon, 1,580m high, is located near the town of Tomohon, about 20km southwest of Manado, the capital of North Sulawesi. - Bernama

The epicentre of the quake, which occurred at 9.48am, was 22km north of Laucala, Fiji, and 7,028km southeast of Semporna, Sabah, it said in a statement.


And in the afternoon at 1.34pm, a 5.8-magnitude earthquake struck Irian Jaya in Indonesia, the Malaysian Meteorological Department said. The epicentre of the quake was located 173km northeast of Sorong in Indonesia and 1,669km southeast of Semporna in Sabah.


On Monday, in The Philippines, a magnitude 6.7 quake struck near Tayasan town on central Negros island, damaging bridges, highways, some public buildings, and toppling power and communications lines. Churches and houses were also destroyed. The death toll from landslides has risen to 35 and scores of missing are feared dead as rains and aftershocks hamper rescue efforts, disaster officials said on Friday.

More than 1,400 aftershocks had been recorded since Monday, making it difficult for rescuers to search for survivors due to unstable ground and softened by several days of rains.

As for Malaysia and Singapore, the two countries have a better Bazi this year hence, we will not be having much excitement in the form of natural disasters. Keeping fingers crossed though.

Also, things will be looking up for the U.S. this year, the U.S. being in the Wealth Star (Star #8). A better economy ahead according to the reading. For your reference is the Flying Star Chart borrowed from Foong PC's blog. 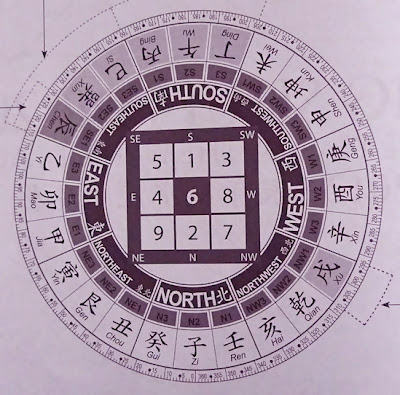 Whether we believe in Feng Shui or not is immaterial. Nature will take its course regardless. The ability to interpret the Bazi Chart and Flying Star Chart provides a way to have an idea of what lies ahead.

If you are interested to know more about Feng Shui for this year, head on over to Foong PC's blog. He attended both Lilian Too's January 1 talk as well as the English and Cantonese sessions conducted by classical Feng Shui master, Joey Yap. All sessions were held at the Plenary Hall of the KL Convention Center (KLCC) in Kuala Lumpur.
Posted by HappySurfer at 3:39 PM