A Leap into Leap Day 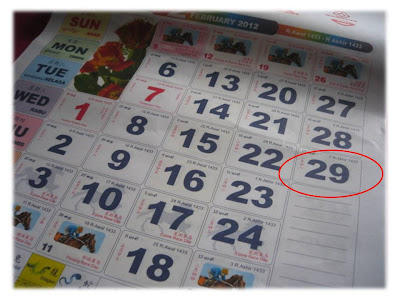 Today, Feb 29, is an unusual day, a day which happens only once in every four years thus it is called a Leap day and 2012 is a Leap year. (Does it mean that if your birthday falls on this date, you will only grow a year older every four years?)

Why do we need a Leap day?

I'll let Wikipedia explain..
Although most years of the modern calendar have 365 days, a complete revolution around the sun takes approximately 365 days and 6 hours. Every four years, during which an extra 24 hours have accumulated, one extra day is added to keep the count coordinated with the sun's apparent position.

The Chinese lunar calendar also incorporates leaping (if there is such a word to describe it), not leap days but leap months. Certain years, there are thirteen months in a lunar year and it is not restricted to any particular month.

How is the leap month determined?

Notice the calendar in the image above? This is the type of calendar traditional Chinese families would have at home which I have at work as well because it also incorporates the lunar calendar whose days of the month we refer to for events and festivals. It comes in handy for those who go vegetarian on the first and fifteenth day of the lunar month. This fast is usually done for religious reasons. Chinese festivals are based on this lunar calendar, but of course, including

So, happy Leap day, Everyone!
Do something nice today, something memorable or something bad which it won't come back to haunt you until four years later! LOL!