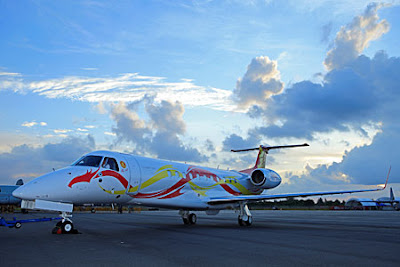 Above: Jackie Chan's Embraer Legacy 650 lands in Singapore for the Singapore Airshow 2012

If you are in Singapore from Feb 14 until 19, you may want to take in a visit to the Singapore Airshow 2012 at the Changi Exhibition Centre. This is Asia's largest airshow and one of the three most important aerospace and defence exhibitions in the world.

Plus, you will get to see actor, Jackie Chan's Embraer Legacy 650 which is making its first public appearance since delivery to the international movie star. Jackie Chan's jet, with its distinctive dragon motif, is also the first Legacy 650 to be displayed at the Singapore Airshow.

The  US$30 million (S$37 million) jet left Brazil to meet him in Singapore. Jackie Chan offered to be Embraer's Brand Ambassador, especially for China. 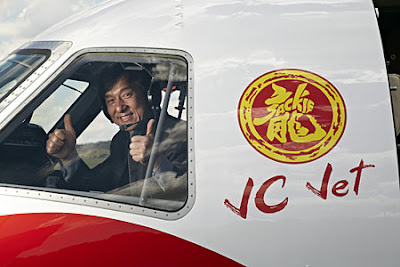 
The Legacy 650 is very spacious with three distinct cabin zones, a wet galley and the largest in-flight accessible baggage compartment of its class.

Jackie's plane can hold up to 13 passengers and is capable of up to eight-hour flights around Asia and elsewhere.

For you who are familiar with aircrafts, the Legacy 650 range is 3,900 nautical miles (7,223km) affording such nonstop distances as Beijing to Dubai, United Arab Emirates, and Hong Kong to Adelaide, Australia, carrying four passengers. Its state-of-the-art cockpit includes the Honeywell Primus Elite avionics suite, greatly reducing the pilot workload and enhancing safety.

With three distinct cabin zones, the Legacy 650 is the only jet in its class with this level of comfort. Advanced Wi-Fi technology and significantly reduced cabin noise means the Legacy 650 ensures an environment in which passengers can work or rest.

It includes a fully equipped wet galley and the largest in-flight accessible baggage compartment, something Embraer is known for.

Posted by HappySurfer at 5:50 PM