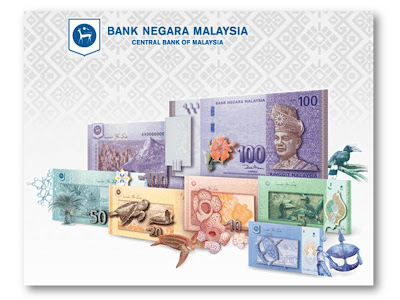 The new Malaysian coins are now in circulation. Was elated (I'm simple like that) when I received at a checkout counter a 10-cent new coin yesterday. No surprise actually because I've seen the whole set of the new coins.

According to Bank Negara Malaysia, the exercise of issuing new banknotes and coins is undertaken periodically every twelve years. The theme of the design of the new currency series includes features that are distinctively Malaysia. It also has enhanced security elements in line with the latest advancements in technology for currency notes.

The new fourth series design of banknotes feature in the denomination of RM1, RM5, RM10, RM20 and RM100. The current design of the RM50 banknote already in circulation since December 2007 to commemorate Malaysia’s 50th Anniversary of Independence will continue to remain in circulation. The new design coins are the third in the series for the denominations of 5 sen, 10 sen, 20 sen and 50 sen. This new series of banknotes and coins will co-circulate with the existing series until the latter are gradually withdrawn from circulation.

The Star today highlighted problems encountered with the new coins at parking autopay machines. I remember we used to have this problem when the one ringgit coin was introduced.