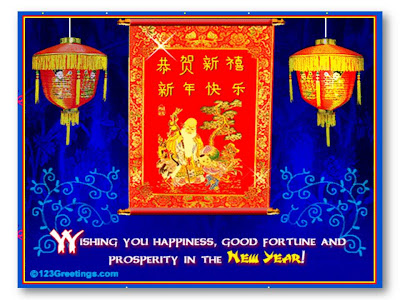 Today is the Third day of Chinese New Year. We have been brought up that the Third day is not for visiting if we have not been to the host's home on the First day or Second day. This day has been named Beggar's Day or Poor Man's Day and it is inauspicious for both parties so it is best to stay at home.

Unlike the First Day and Second Day of Chinese New Year, the Third day is a lot quieter with less visits and hosting.

Also, families who had an immediate relative deceased in the past year (in the old days, it was a period of three years) will not go visiting as a form of respect to the deceased. It is also so as not to bring bad luck to the occupants of the home visited.

The Third day is a favourable day to visit the temple of the God of Wealth and have one's future told for the coming year. The elder who goes to the temple is usually the matriarch of the family and she would make it a point to have every member's future told. This is done by way of shaking a bamboo container of numbered sticks.

What she does is, she kneels down in front of the deity in the temple and asks for blessings at the same time shaking the bamboo container of numbered sticks until one stick falls out of the container onto the floor. She then picks it up and proceeds to collect the fortune slip that matches the number. The man at the stand will explain the meaning of the reading based on what is asked for which could be relating to a relationship, business luck, health, or general luck. This procedure is repeated for each family member. It's a tedious activity so if your mom or grandma has done this for you, know you are blessed. Appreciate the hardwork not forgetting the love and concern she has for you.

Posted by HappySurfer at 3:33 PM