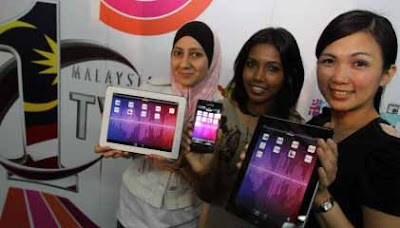 The 1Malaysia philosophy is spreading its wings further with the launch of 1Malaysia TV on Sunday by the Prime Minister who said that "with today's technology, the public is able to receive news and information "in the blink of an eye and that official government news and information must be disseminated in real time speed to curb the spread of false news.

1Malaysia TV is an internet and mobile tv and can be accessed using Apple, Blackberry and Android smartphones and tablets.

The address is at www.1malaysiaiptv.com or www.erama.tv/mobiletv. Smartphone users can download the application from their respective app store.

According to Bernama, 1Malaysia TV is recognised by the Malaysia Book of Records as the first new media television based on the 1Malaysia concept.


Sources:
- The Star.. PM: Official news must be put out quickly to curb spread of false news
- Bernama
Posted by HappySurfer at 9:23 AM