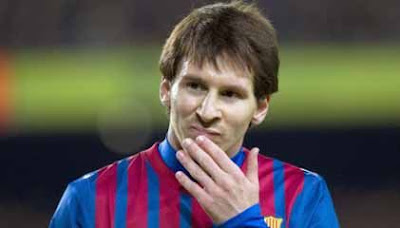 Messi (not to be confused with the Octopus though it is named after him) has been named World Player of the Year.

Messi collected more than 60 percent of the votes cast in the annual poll of the British magazine’s readers from more than 40 countries – a record haul since the awards began in 1982.

Cristiano Ronaldo of Real Madrid and Portugal came in a distant second with 9.3 percent of votes while last year’s winner, Messi’s Barca team mate, Xavi, was third with 7.6 percent.

In fact, European champions Barcelona swept the board in World Soccer magazine’s prestigious annual awards with Lionel Messi named World Player of the Year, Pep Guardiola Manager of the Year and the side that won the Spanish and Champions League last season named as Team of the Year.

So, looks like Messi the Psychic Octopus is on its way to stardom as the next psychic octopus. He did correctly predict Barca to beat Real, didn't he?


Source: The Star..Barcelona sweep the board in World Soccer awards
Posted by HappySurfer at 1:23 PM