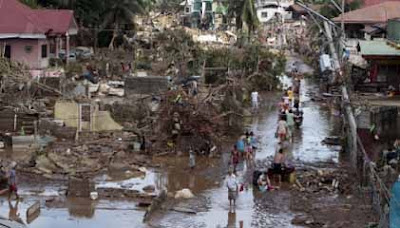 800 people are reported missing in southern Philippines on Sunday (today) after houses were swept into rivers and out to sea by flash floods and landslides caused by Typhoon Washi that hit the area.

Cagayan de Oro and nearby Iligan cities on Mindanao island were worst hit when Typhoon Washi slammed ashore while people slept late on Friday and early Saturday, sending torrents of water and mud through villages and stripping mountainsides bare.

Floods washed away entire houses with families inside in dozens of coastal villages in Cagayan de Oro and Iligan.

"This is the first time this has happened in our city," Vicente Emano, mayor of Cagayan de Oro, said in a radio interview. He said officials in the area did not receive adequate warning before the typhoon struck.

The death toll has reached 650 and thousands have been made homeless.

Source: The Star
- Philippines searches for hundreds after typhoon kills 650
Posted by HappySurfer at 9:26 PM