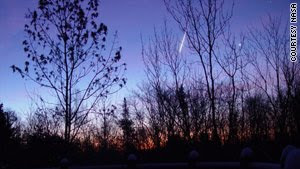 So did you manage to view the Leonids or Leonid meteor shower yesterday morning?

Each year, Nov 17-19 marks the time of Leonid meteor shower. Meteor showers are usually named after the area of the sky from which they appear to radiate. The Leonids emanate from the constellation Leo.

The radiant begins rising from around 12:30am and the meteors will last until morning twilight. Look in the areas around the radiant, rather than directly at it.

If you missed it and would still like to see it, you still can as it has been reported that the Leonids are not a one-night stand. The dust from Tempel-Tuttle spangles the sky for a few nights every year in mid-November. This year, the peak is expected during the predawn hours of Nov. 17, but early-morning hours on the dates surrounding Nov. 17 could provide a decent show, too. 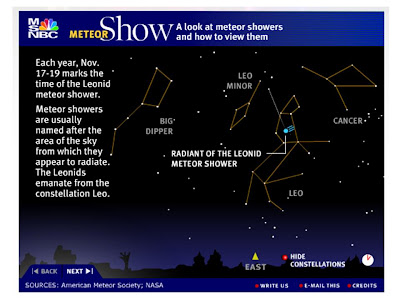 Posted by HappySurfer at 3:13 PM

Email ThisBlogThis!Share to TwitterShare to FacebookShare to Pinterest
Labels: astronomy