Malaysia has made it into the 10 Aviation Mysteries when a MAS flight MH370 vanished in the morning of Saturday, March 8, hardly an hour after take-off from the Kuala Lumpur International Airport.

The jetliner, a Boeing 777-200ER, with 239 on board took off at 12:41am scheduled to arrive in Beijing at 6:30am. The plane has yet to arrive. There were 227 passengers and 12 crew members on board that Boeing 777 jet reputed to have a formidable safety record. 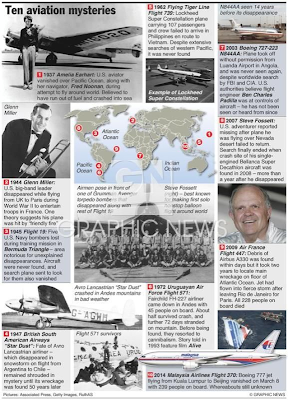 Source: The Star
Many countries are involved in the search for the missing MH370 which began at the South China Sea near Vietnam where the plane was reported missing at the border of Malaysia and Vietnam airspace. With new information about the plane making a flight turnaround, search efforts have been expanded to include the Straits of Malacca and the seas beyond the Andaman Sea. 22 countries are now involved in the search with a count of 43 ships and 58 aircraft scouring the seas in this ninth day since the plane disappeared.

One week after the disappearance, Prime Minister, Najib Razak, with new information gave a press conference. He said evidence pointed to a deliberate diversion of the flight and that it was no accident that MH370 went off radar. You can hear his speech below.


More inputs todate has pointed to the pilots who are now the focus of the probe. Investigators are also wondering whether there was a struggle on board as available data shows a sudden ascent to 45,000 feet and a dive to 23,000 feet before it went back up to 35,000 feet.

Reuters has this final picture of the missing Boeing 777-200ER jet taken in February above Polish airspace. 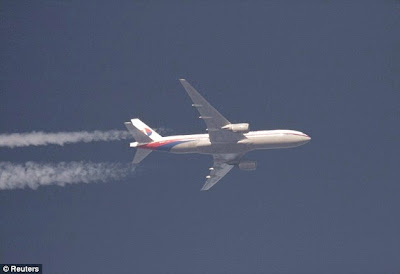 Malaysia Airlines (MAS) has decided to retire its MH370 and MH371 flight codes on the Kuala Lumpur-Beijing-Kuala Lumpur route.

In their place, MH318 would be used for the Kuala Lumpur-Beijing journey while MH319 would replace the Beijing-Kuala Lumpur route beginning Friday.

“As a mark of respect to the passengers and crew of MH370 on March 8, 2014, the MH370 and MH371 flight codes will be retired from the Malaysia Airlines’ Kuala Lumpur-Beijing-Kuala Lumpur route,” the Malaysian national airlines announced on its website.