Oh Glory! After some rain yesterday, the haze has let up a bit as these API/PSI readings show today - more greens than yellows... 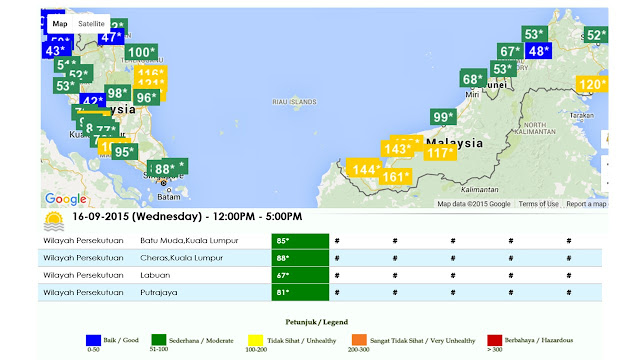 With peat fire hotspots numbering in the hundreds, it will be a while before this haze situation abates. It is still unsafe for outdoor activities. Schools are still closed here.

Yesterday, The Jakarta Post reported thousands were fleeing Pekanbaru as the Pollutant Standards Index (PSI) in the Riau province capital, which is about 280km away from Singapore, surged to a record 984 yesterday. 984! No joke.

Many have taken to the roads, trying to find their way north to neighboring Medan, or west to Padang, to escape the thick haze that has rendered their hometown unliveable.

The exodus via land includes people who had initially planned to fly out of the city, after their flights were grounded owing to the poor visibility caused by the haze from forest fires in the provinces of Riau, Jambi and South Sumatra.
Posted by HappySurfer at 3:38 PM

Email ThisBlogThis!Share to TwitterShare to FacebookShare to Pinterest
Labels: haze