A Chance to see Saturn in the sky Today

If you are in Malaysia today, you will get the rare chance of seeing planet Saturn either through a telescope, binoculars or even with the unaided eye when it is opposite the sun after sunset on June 3, which is today.

National Space Agency (Angkasa) research officer at the Langkawi National Observatory, Farahana Kamarudin, said that at this time, the ringed planet would be at its closest to Earth.

"If you are viewing it with the unaided eye, it can be seen as a bright star," she told Bernama.

She said the planet would be in the east with the constellation Scorpio.

Farahana said Saturn could be viewed in an open space which is unhindered by clouds or light pollution.

"In fact, if you use the smartphone, you can use the Google Sky or StarMap software to help track the planet," she added.


Saturn is the sixth planet from the Sun and the second-largest in the Solar System, after Jupiter. For comparision, below is a composite image roughly comparing the sizes of Saturn and Earth - courtesy of Wikipedia. 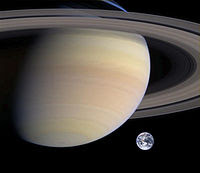 To get a better picture of just how small Earth is compared with the rest of outer space, the following photos will help put our planet in perspective.


Saturn has a prominent ring system that consists of nine continuous main rings and three discontinuous arcs and that is composed mostly of ice particles with a smaller amount of rocky debris and dust.


Saturn's rings are so large that you can fit six Earths across them. The millions of ice particles that make up these rings are only as large as a few feet across for comparison. 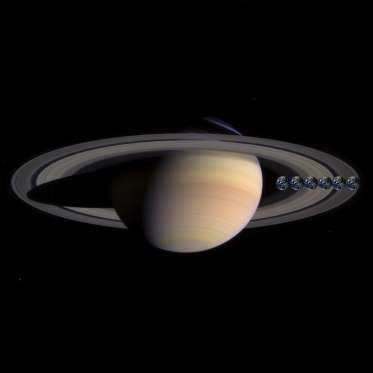 These photos and more can be viewed on MSN.. 11 mind-melting photos will make you realize how shockingly small Earth is


Other sources:
- The Star
- Wikipedia

Email ThisBlogThis!Share to TwitterShare to FacebookShare to Pinterest
Labels: astronomy