Beside a beautiful orange Lamborghini

On my last visit to Genting Highlands last year, outside the main hotel, Maxims Genting, people were milling around some 7 to 8 expensive-looking imported European cars, including Lamborghinis and Ferraris. The people were peering into the cars and taking pictures of them as well as having their own picture taken standing next to one.

It was a misty, cold morning. Huddled under my jacket standing just outside the hotel entrance, one lady, I noticed, spent an extraordinarily long time having her picture taken in various poses and at different corners beside an orange model, not unlike the one below.

Beautiful cars are normally pictured alongside good-looking people (or at least perceived such) or you see beautiful ladies posing beside these vehicles in a roadshow. The picture below, has a different setting however. I wonder where was this taken. Perhaps KL Chinatown? 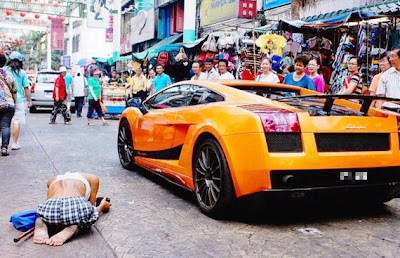 This image is today's winner of The Star's Thumbnail, a readers submission corner of daily images. Titled, Rich dad, poor dad, this was taken by Kenny Seow @ Weng Leong with the caption Wealth disparity rearing its ugly head. Indeed.

UPDATE:
Received three comments (two anonymous) on this post indicating that Kenny Seow is not the owner of the picture.

Profanity is not tolerated here so one anonymous comment has been deleted. I would still like to use this image because it fits in well with my post and is well-taken and reflects the reality of life.

If you are the owner and would like to have image removed, please leave a comment or you can send me an email. Alternatively, if you do not mind image to be used here, please advise as to whom it should be creditted to. Will gladly give due credit.
Posted by HappySurfer at 11:32 AM