I imagine the view looking out to sea from homes and hotels on this island of Giglio must be a sight to behold before this carcass of the 114,500-tonne Costa Concordia cruise ship came along. 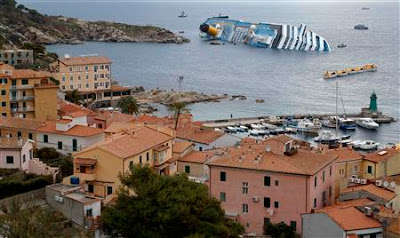 This holiday resort island just 11 miles off mainland Italy is normally busy from May to Sep but right now is hosting some 4200 passengers of the troubled cruise ship.

Night-time searches would be suspended from now on according to a Firefighters' spokesman. Another senior firefighter told Reuters that all the areas of the part-submerged liner that are above water had now been searched, indicating faint hopes of finding more survivors. Six bodies have been found so far, 16 missing people out of the 4,200 who were aboard.

The vessel's captain, Francesco Schettino, was arrested on Saturday. He is accused of manslaughter and abandoning his ship before all those on board were evacuated.

The vast hulk of the 290-metre vessel, lying on its side, loomed over the little port of Giglio, off the Tuscan coast.

A large gash could be seen in its hull but salvage experts said its fuel tanks did not appear to have been damaged, lessening the danger of an oil spill in the pristine waters.

Schettino, the captain, said the ship hit rocks that were not marked on maps and were not detected by navigation systems. He said the accident occurred some 300 metres from shore.

There was deep anger in Italy about the accident.