Teflon non-stick frying pans are safe for use

A check on the word 'Teflon' yielded some interesting information.

Did you know that Teflon is a nickname given to persons, particularly in politics, to whom criticism does not seem to stick. The term comes from Teflon, the brand name by DuPont of a "non-stick" chemical used on cookware. That comes from Wikipedia.

Some "Teflon" personalities include former British Prime Minister Tony Blair who was often referred to in the press as Teflon Tony; and Russian President and later Prime Minister Vladimir Putin who has been referred to as a "Teflon leader", although the 2008 Russian financial crisis has begun to affect his image among the public. (Wikipedia) 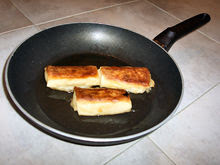 Teflon is actually a generic name trademarked by DuPont for Polytetrafluoroethylene or PTFE for short.

PTFE is a synthetic fluoropolymer of tetrafluoroethylene that has numerous applications. PTFE is used as a non-stick coating for pans and other cookware having a melting point of 327 °C (621 °F), though its mechanical properties degrade above 260 °C (500 °F) according to DuPont. (Wikipedia) In case you are wondering on the safety of non-stick pans, various food safety and environment protection agencies in the U.S. and Europe have affirmed their positions that these nonstick coatings are safe for intended use in cookware.

PTFE is often used in containers and pipework for reactive and corrosive chemicals such as in a Delafield teflon hose. PTFE is also used as a lubricant as it reduces friction, wear and energy consumption of machinery.